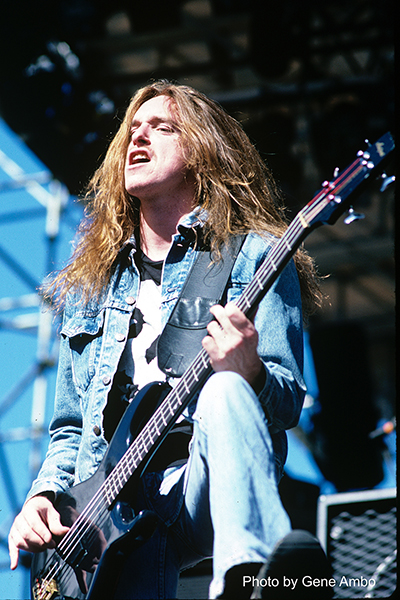 Cliff Burton was the bassist of  Metallica and known as the best heavy metal bassist ever.

He chose ARIA SB-BLACK’N GOLD I as his partner and performed on the band’s first three studio albums, Kill ‘Em All, Ride the Lightning, and Master of Puppets. He also received a posthumous writing credit for the song “To Live Is to Die” from the band’s fourth studio album, …And Justice For All. He was selected as the ninth greatest bassist of all time in an online reader poll organized by Rolling Stone in 2011

Tye Trujillo is a bass player of USA based  thrush metal band OTTTO.

John Taylor is the bassist and co-founder of well-known British band “Duran Duran” which is one of the most popular group in the world during 1980’s. He also performs as a solo artist and a member of two supergoups “The Power Station” and “Neurotic Outsiders”.

His great activity never stop to this day. Including the reunion of Duran Duran he has been making marvelous success as well as giving a huge influence to other bass players. And in 2013, he was awarded for MusicRadar’s greatest bassist all the time.

Johnny Moeller is a Texas based Guitar Player, currently with The Fabulous Thunderbirds.

Todd Pipes is a Bass Player and Lead Singer of US based band Deep Blue Something.

Deep Blue Something is an American rock band who are known for their 1995 hit single “Breakfast at Tiffany’s” from their second album Home. Home achieved gold-record status; however, the band parted ways with Interscope and went on creative hiatus for several years, only releasing the follow-up Byzantium in Japan and some European countries. They eventually signed with the Aezra label and released Deep Blue Something in mid-2001, breaking up shortly after. The band regrouped with all members at the end of 2014 and signed to John Kirtland’s independent label, Kirtland Records.

Michael Smitham is a guitar player and the singer of the legendary British beat band “The Fortunes”.

Michael ‘cut his teeth’ touring in the UK and Europe with ‘Eyes of Blue’ backing pop legends such as Del Shannon, PJ Proby, Johnny Tillotson, and Bobby Vee. ‘Eyes of Blue’ later became ‘Smackee’ who were asked to be the the backing band of “soul legends” Percy Sledge, Ann Peebles, and The Marvelettes. The group toured at least twice a year throughout Germany and entertained in major cabaret venues all across Europe and The Middle East.  Smackee won ‘Band Of The Year’ at one point in time and came second in the nationally shown ‘Search For A Star’ TV show. In 1983 Michael was seen by founder Fortunes members Rod Allen and Barry Pritchard, and was asked to join The Fortunes and since then, has become the longest serving member of the band.

Australian musician Brook Rees has been performing and recording as a bassist for the past 25 years.
He has toured throughout Australia, Asia and Europe and has recorded with artists including Grammy Nominated singer Jai Uttal, Australian Funk/Soul artist Kurtis , award winning Iranian/American writer Sholeh Wolpe and he currently plays a pivotal role in Australian cinematic electro outfit Vesica Pisces.

Brook is also a founding member of Australian/USA rock band Malakye Grind. Malakye Grind have been a part of the Australian rock scene since the early 90’s and released their most recent alternative rock album “Music for Midnight People” signing with UK’s Extreme Music Label in 2021. The album debuted at #47 on the Australian iTunes charts and it’s first single “Watch Them Burn” received international rotation airplay in the USA, Canada, Brazil, Egypt, throughout Europe and in Australia.

Koby is the bass player in the Australian hard rock band Mixed Up Everything.

The group of 4 brothers formed their band in 2016 and released their debut album in 2017.  They’ve been touring Europe extensively, where many reputable news papers around Europe, have compared their shows similar to Nirvana, Pearl Jam, Soundgarden and the rest of that 90’s Seattle rock sound and energy.
Mixed Up Everything has their eyes set high and want to become the world’s biggest rock band and a household name!

Henrik Flyman is a Swedish award winning composer, guitarist and producer. The discography counts over 20 releases and he is frequently touring around the world. To the broader audience he’s best known as the man behind Evil Masquerade which he founded 2003 in Copenhagen and live- and studio guitarist with Lacrimosa since the Sehnsucht world tour 2009. Back home in the studio he also composes for film and TV. For further detail please visit http://henrikflyman.com/